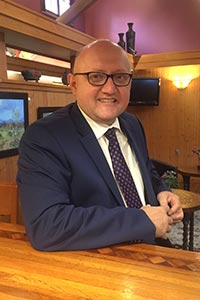 Peter Fassbender, a native of Chile has been in hospitality for 20 years. Peter graduated in 1994 from Instituto de los Andes in Lima, Peru with a double major in Business Administration and Culinary Arts. After living and working in Peru for 4 years, Peter went on to work as Chef de Partie in Italy, were he became so inspired by old world cuisine that he decided to attend Le Cordon Bleu in Paris, France for their culinary and pastry programs. After graduation, Peter migrated to the United States, were he worked as Executive Chef on a hunting lodge in the outskirts of Perry, Georgia.

In 2004, Peter was hired as Executive Chef at Season’s at Highland Lake. Peter held this position until 2012 when he was promoted to Director of Food and Beverage at Season’s. After a brief passage through The Cliffs in 2018, we are pleased that Peter decided to return home, and in 2019, he firmly reset his roots at Highland Lake Inn & Resort as our Director of Food and Beverage. Alphonso Piper Jr, a native of Smithfield, NC, started his professional culinary career in Savannah, GA at Pacci Italian Kitchen a Sous Chef then to The Mansion on Forsyth Park, Bohemian on River Street and The Landings Club of Skidaway Island. Longing to return back to his North Carolina roots Alphonso became Sous Chef at The Katharine Brasserie in Winston-Salem, NC, and most recently Sous Chef at the Stable Café on the Biltmore Estate. Alphonso is a strong believer in farm to table ingredients that are fresh and local. “Bringing the simplest ingredients to life and creating bold flavors.” Chef Alphonso gives credit of his culinary foundation to his Grandmother Mary, Aunt Gwen, and Chef Dusty Groves. Robin Bennett is a native of Western North Carolina and a Hendersonville resident for the past 33 years. Robin has been in the foodservice industry for over 25 years; her first experience was on Hilton Head Island, SC. In 1982 Robin returned to Hendersonville as co-owner of Expressions Restaurant. Expressions remained in business for 25 years and sold in 2007. She was also co-owner of Purple Sage Cookware and Wine Shop from 1993 until 2014. Robin has been with Season’s since 2014 and is currently our Restaurant Banquet Manager.

Tasha Roby grew up in South Asheville and has been a Horseshoe resident for 5 years. Tasha has 26 years of experience, in both dining room and kitchen operations. In 2017, she decided to attend Asheville-Buncombe Technical Community College pursuing her Baking and Pastry Certificate and an Associate degree in Hospitality Management, graduating in 2020. One of her true passions is to put smiles on faces and bring happiness to others, which can be seen with her puns on social media and her warm interactions with guests. Tasha has a large family, a husband who works for the City of Hendersonville, 2 children in college and 2 children in their final years of high school. She has fun baking all kinds of sweet treats for her family. Tasha’s favorite part of spending time with her family sitting by a bonfire, roasting marshmallow, laughing, and reminiscing about great memories.